When designing a video game, one of the biggest challenges is filling your fictional world with memorable video game characters. If you’re looking for some inspiration or direction for creating great characters for your game, here are a few things I’ve learned that can help.

How can you make memorable video game characters? You can make them by:

While the areas above are the basics of creating a memorable character, there’s a whole lot that goes into each of the points mentioned above to really make your character stand out in the industry. Let’s examine each of them further to give you some practical takeaways for your character design process.

The first step I like to take when designing characters is to develop a video game character profile for each of my main characters. For this step, you can be as detailed as you like, although I find it’s helpful to focus on just the main pillars of the character first, and then going back through to fill in all of the details.

Here are the main things you should decide for your character early on in the process:

Where and When Do They Live?

If you already have your story planned out, you should have a good idea of where and when your character lives. At this point, your goal is to set it in stone so that you can build upon it in the additional areas that we’ll go into below.

The setting for your character can play a big part in their outlook on life and how they naturally interact with the world around them.

How Old Are They?

The next thing I like to determine is how old my character is. Depending on the audience you’re creating your video game for, the age of your character can play a big role in making them more relatable.

Growing up, I always enjoyed playing video games with younger protagonists because it made it easier for me to imagine myself in their shoes. This certainly isn’t a hard and fast rule, but keeping your hero’s age close to your audience’s can be a smart move at times.

The age of your video game character also has significant implications for your story. If your protagonist is supposed to be a seasoned warrior, making your character an 8-year-old probably won’t make very much sense, (although that could be pretty interesting.)

What is Their Backstory?

The backstory for your video game character is good to figure out early on because it should have an impact on the decisions that they make.

The trouble with backstories for video game characters is relaying them to the player. If knowledge of the character’s backstory essential for players, you’ll need to figure out a way of communicating it to them without boring them with endless textboxes or cutscenes.

Because of this problem, a good strategy is to boil down your backstory to just the essential information your player needs and then communicate more of the character’s past using elements from their setting.

Another option is to simply erase the character’s backstory altogether and make the purpose of the game to unravel the mystery of where they came from and how they got where they are. This puts your player and your character in exactly the same place, making it easier for players to connect with the protagonist.

What Are Their Motives?

Memorable characters in video games have memorable motives. You must determine why your characters do what they do. Why are they willing to risk everything to go on a legendary adventure?

Motives play a vital role in making characters more relatable. If a player can really understand why a character is driven to do what they’re doing, then they will be more invested in the events that are unfolding.

Once you know your character’s basic wants, you can then come up with reasonable actions they might take to satisfy those wants. If a character wants a sense of accomplishment, they might be motivated to go climb Mount Everest.

While knowing a character’s wants can help players understand why a character is doing something, stories are generally more compelling when a character needs something.

Here are a few basic needs that practically every character will have:

Using our previous example, what if rather than climbing Mount Everest because of the desire for a sense of accomplishment, the character needed to Climb Mount Everest to win prize money to pay for a medical procedure for their only friend?

Combining wants with needs can up the stakes and help players empathize with the character and situation.

What Are Their Strengths and Weaknesses?

An essential trait of all great characters is that they have both strengths and weaknesses. By incorporating these both, the final result is a well-rounded video game character that players can relate to.

For many, video games are an opportunity to do things that they’re not able to in the real world. Because of this, giving your character plenty of strengths can make a game feel far more rewarding for players. The key is providing strengths without removing all of the challenges.

When balanced properly, a video game character’s strengths will make a player feel a sense of accomplishment as they use them to overcome challenges.

It’s been said that any strength taken to an extreme becomes a weakness. Once you’ve determined your character’s strengths, you can easily see how those strengths might cause issues when used in the wrong context.

A character’s desire to provide for their family could easily turn to greed, love can become jealousy, bravery can become recklessness, and loyalty to the wrong people can lead to compromising personal values.

Addressing flaws such as these throughout your video game can give it a far greater level of depth.

If you feel a little overwhelmed creating your character’s personality profile, something I’ve done in the past is to take a personality test from the perspective of my character. This can help you think through their personality traits, and when you’re done, you can do some reading about the personality type to give you some fresh ideas. You can find my favorite free personality test here.

When determining the type of character that you want for your game, I find it helpful to think in terms of the big picture.

What traits can you weave into your characters that will make the game more interesting? How can you capitalize on their strengths and weaknesses to reinforce the feeling that you want players to walk away with?

If you want your game to feel intense, perhaps your character is unable to swim, has a phobia of water, and the gameplay takes place primarily over water.

If you want your game to feel empowering, maybe your character has supernatural strengths and abilities that protect them from most danger.

Giving Them a Distinct Appearance and Name

When you meet someone new, the first thing you typically take notice of is what they look like. After that, you notice what they’re wearing. The same can be said of video game characters.

A video game character’s appearance should fit the context of the story. If they’ve grown up in a desert region, it makes sense that their skin would be darker. If they’ve spent years working in a coal mine, their hands would naturally be coarse and worn.

Once you’ve decided what your character looks like, you need to determine what they’re wearing. The clothes a video game character wears are one of the first opportunities you have to tell players something about the character, so you should do your best to make them interesting.

If your goal is to come up with a memorable character, sometimes the most helpful thing to do is to review other iconic video game characters.

Read up on their backstories, why their appearance is what it is, and how game designers developed their gameplay mechanics.

Once you’ve completed a few case studies, take what you’ve learned and apply the information to the character that you’re working on. However, avoid copying too closely. Coming up with an original character is more memorable, and more fun for players.

Sometimes this might even require changing your character’s physical appearance. If you’re familiar with the Banjo-Kazooie series, you might be interested to learn that Kazooie, the bird that rides around on Banjo’s back, was only added to better explain the character’s incredible jumping abilities.

In addition to being explainable, the gameplay mechanics should feel smooth and natural as the player performs them. This means experimenting with the animations and button mappings until things feel just right.

A word of warning though. If you work on this for too long in any one sitting, you can start to lose sight of what you’re working on. Because of this, I recommend taking a step back every so often so that when you revisit that area you’ll have a fresh perspective.

Best of luck coming up with your characters! Here’s my article on Video Design Basics if you’d like to keep reading. 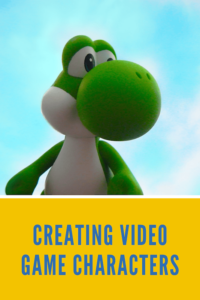